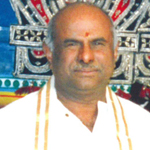 The eldest son of Mr. A.T. Sinnathurai and Pasupathy, he was a caring and generous brother to his 11 brothers and sisters. He was educated at Hartley College, Point Pedro, where he excelled in both academic studies and in sport, and was also appointed Head Prefect in his final year. He went on to gain a degree in Electrical and Mechanical Engineering at the University of Ceylon, became a demonstrator there and then took up a post as a Lecturer at Katubede University. He came to the U.K. in 1964, with his wife Karuneswary and only a few possessions to their name. They soon settled in Wimbledon Park and began to raise a family – two daughters and a son. Realising that a vital part of our identity was our religion, he opened the doors of his own home and celebrated Shivarathri and other major Hindu Saivite festivals there. His heart and his home were always open and this meant that most Sri Lankan Tamils who came to the U.K. in the 1960’s would have come to his house either for a meal, to share in prayers, or even to stay until they got settled. For many years, he continued to have religious services at his house. But, as the number of Tamils coming to the U.K. steadily grew, he realised that there was an urgent need for a proper Hindu Saivite Temple here in the U.K. He was a founder member and Life Trustee of the Highgate Murugan Temple and used his skills to help raise money and to find an appropriate site for the Temple.

The need for a Temple so great that in 1980, the Lord blessed him with the means and the opportunity to build the Shree Ghanapathy Temple in Wimbledon. Within a year the Temple had its’ Kumbhabishekham and became the first fully consecrated Hindu Temple in Europe. And from small beginnings, he nurtured and helped it to grow into a thriving centre for Hindu religious, cultural and social activities.
Over the years, he helped and supported many of the other Hindu Temples that were subsequently built here in the U.K
He also supported many of the Tamil charitable organisations set up here in the U.K. There are too many to mention here, but they included the Saiva Munnetta Sangam, the Tamil Orphan’s Trust and the ITF. A man of action, he was always looking for different ways in which he could help organisations that were set up to help our community here in the U.K. and also our people struggling back in Sri Lanka.
Although he helped so many Hindu Temples and Tamil organisations here in the U.K., his greatest and most lasting contribution to our community has been the Ghanapathy Temple. As a Hindu Saivite, he created a Temple with beautiful statues and traditions that have proved to be a focal point for many Hindus living in the London Borough of Merton and beyond. As a Sai Baba devotee, he also created a Sai Mandir, with the blessings and guidance of Bhagavan Sri Sathya Sai Baba, that houses one of the largest Sai Centres here in the U.K.
He was keen to spread the message of Hinduism to other parts of society, and was one of the founding contributors to Interfaith dialogue in London. His in-depth knowledge of Hinduism and its’ philosophy, and his ability to explain complex ideas in the simplest of terms, meant that he was a great teacher of children and many schools and teacher training colleges flocked to the Temple to learn more about Hinduism.

Throughout all the work that he did for the Temple and for the community, the one thought that was constantly in his mind was for the future generations of Hindu children being brought up here in the West. He therefore did much to promote the teaching of Hindu Religious Instruction, Karnatic Vocal, Instrumental and Bharathanatyam to the younger generation and also gave his full support to Tamil Schools that were set up in London and in Surrey.
The final year of his life contained 3 major milestones:

1. He was Chairman of Highgate Murughan Temple, where he successfully lead the Temple through its’ renovation and Mahakumbhabishekham.

2. He was one of the Founders and the first Chairman of the Federation of Saiva Hindu Temples (March 1998), and held its first Saiva Conference in July 1998.

3. He took his beloved Lord Ganesha, for the first time, around the streets surrounding the Temple for the now annual Ther Festival.

On the 16th August 1998, whilst in India, his life came to a tragic and untimely end. He had gone to India to choose additional deities for the Temple, and also to arrange for a group of traditional temple sculptors to come to the U.K. to put the final embellishment on the Temple internal architecture. In death, as in life, his thoughts were for the Temple.

Good work lives on in the shape of the Temple and the religious legacy he has given to Hindus in South London. His family and the wonderful group of dedicated volunteers who work at the Temple and Sai Mandir have pledged to continue his work for the community and to build on the strong foundations that he laid for us all. His picture hangs inside the Temple entrance, but we still also feel his presence in the Temple – the most important place in his life