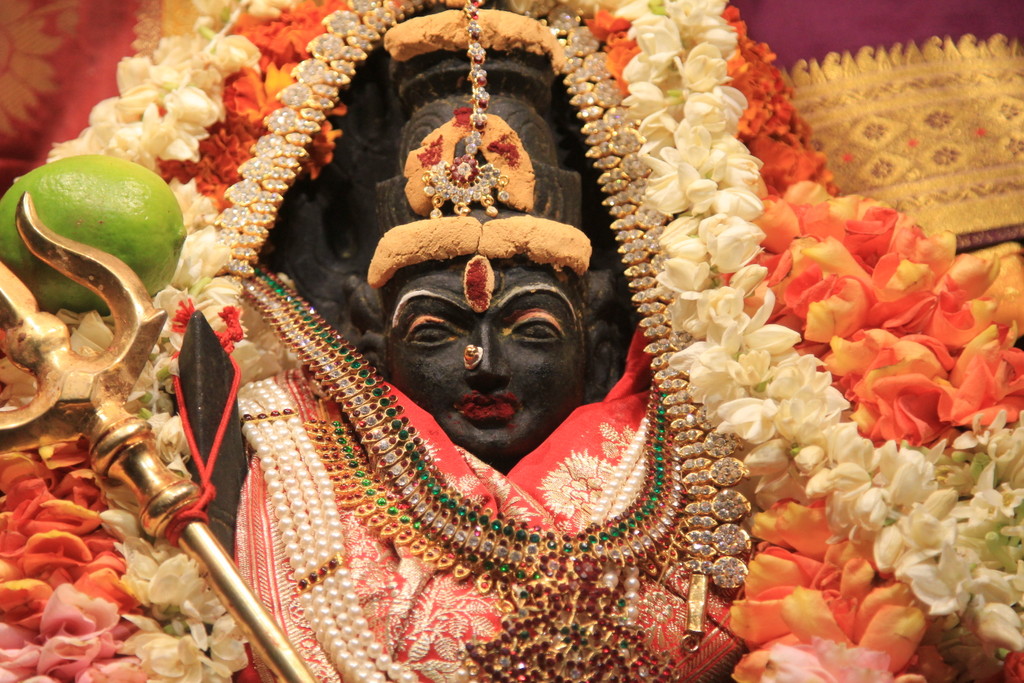 Goddess Mariamman
Mother Goddess (Amman), also called Sakthi. She is regarded as the manifestation of Lord Siva’s Energy. In our Temple, She is in the form of Mariamman who holds a knife orThrishulam (trident), Lord Siva’s Dhamaru (drum) and snake, a Kabalam and Pasum (noose) and is in a seated position. Flames of fire form her hair and She bestows protection upon Her devotees.
At our Temple, devotees sing Navaratnamalai for Mariamman on:
Tuesdays, Thursdays, and Fridays every week after 8pm Pooja
on the first Sunday of every month after the 12noon Pooja and during the whole of Navarathri after 8pm Pooja 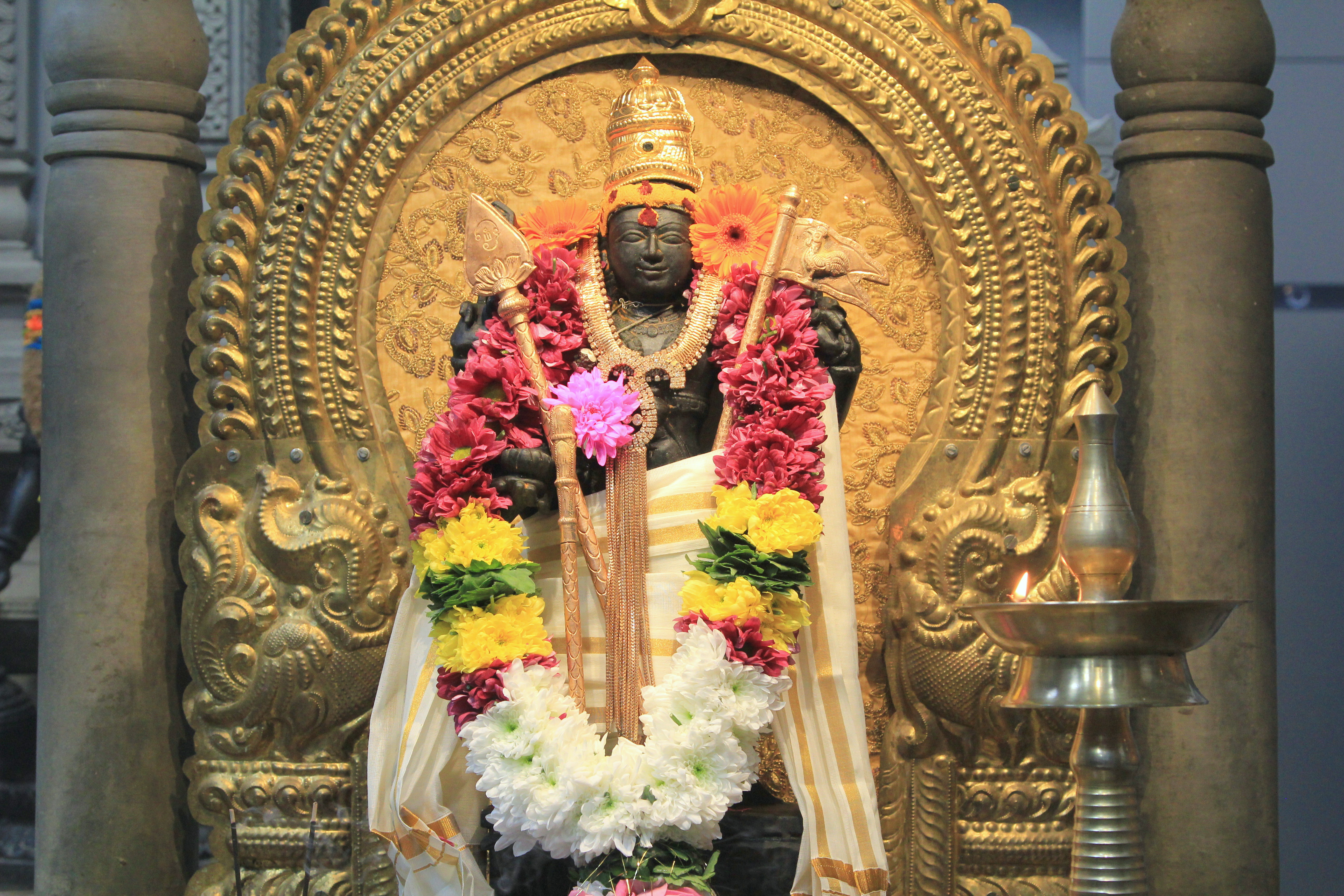 Lord Murugan
Lord Murugan (also known as Karthikeya, Skanda, Subramaniyam b Saravanan )
Murugan means beauty, youthful etc. He is the second son of Lord Siva and is the Lord of Strength and Power. In the Temple, we have two forms of Lord Murugan:
Thiruchendur Murugan – In this form, he battled and finally killed the asura Suurapathman, who became the cockerel on His flag and the peacock (symbolising the liberated soul) as His vehicle.
The other form of Murugan in our temple is made of panchaloka and has His consorts -Valli and Thevayaanai, as the manifestation of His Ichcha Sakthi (emotive power) and Kiriyaa Sakthi (power of action). The Vel (shaped spear) indicates Gnaana Sakthi (the power of knowledge).

Sivalingam
God is formless (Aruvam). But God appears in a full form (Uruvam) and a formless form (Aru Uruvam) to help His devotees understand His many facets. The Sivalingam is the formless form and it is this deity that is venerated in many Sivan Temples. The base of the Sivalingam represents Brahma (signifying creation), the middle circular part represents Vishnu (signifying preservation) and the upper cylindrical part with the hemispherical dome represents Rudra (signifying dissolution). This form of Siva is worshipped particularly during Sivarathri – which is a festival of fasting, contemplation and meditation throughout the night. 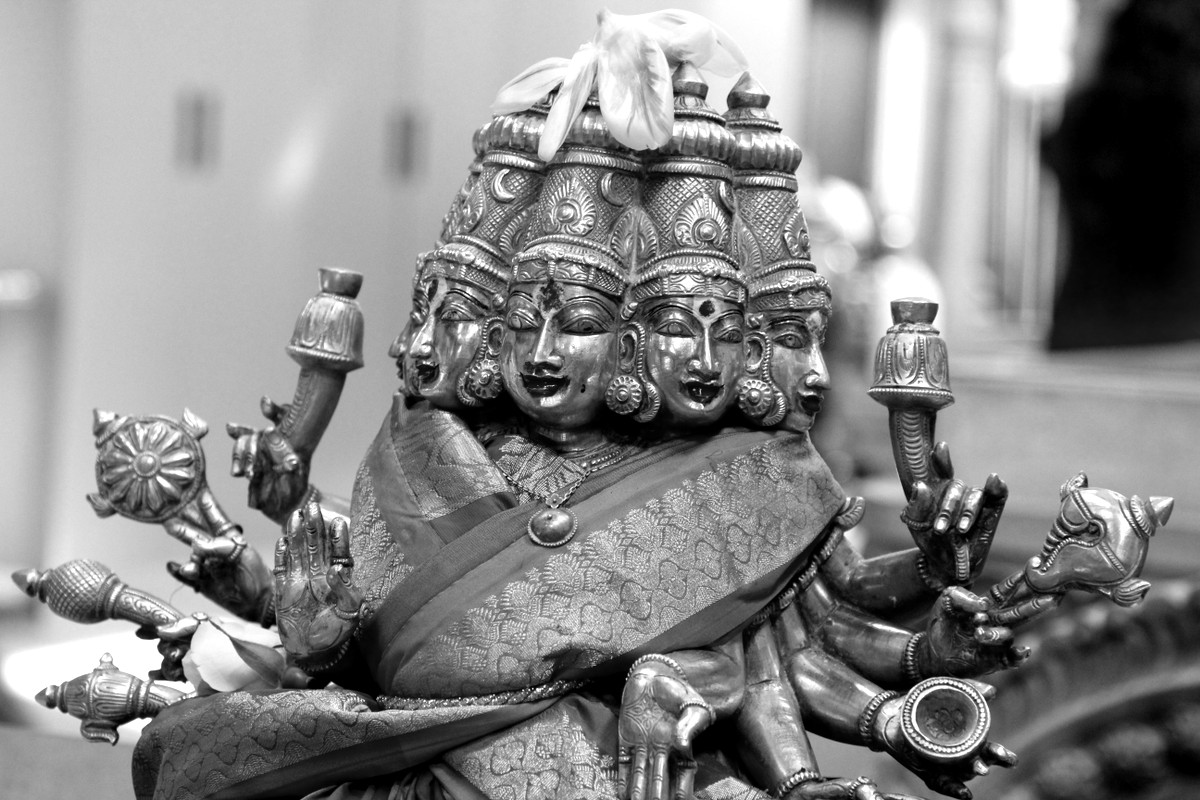 Goddess Gayathri
Her five heads represent creation, protection, dissolution, obscuration and bestowing of Grace. She is known as the Goddess of education and bestower of spiritual knowledge. The most powerful of all manthras is often regarded as the Gayathri Manthra and is recited by all seekers of true knowledge.
The Gayatri Mantra
“Om Bhur Buvaha Suvaha Thath Savithur Varenyam Bhargo Devasya Dheemahi Dhiyo Yonaha Prachodayath” 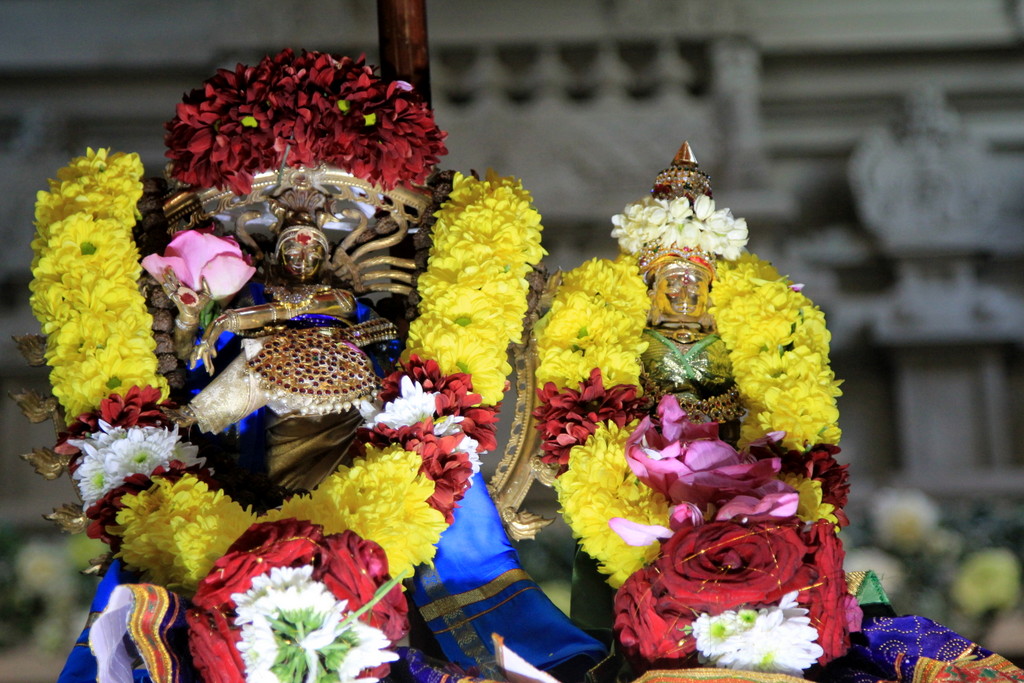 Lord Nataraja
This form of Siva is Lord of the Cosmic dance. This form depicts the constant movement or rotation of the heavenly bodies, the planets, the Universe and even the small atoms that form part of all things. This form is particularly venerated by those who study Bharathanatyam – South Indian Classical dance
Siva’s five fold functions are demonstrated in this cosmic Dance.
Creation – the drum in the right hand Preservation – Raised right with open palm Dissolution – The pot of fire in the left hand Obscuration – Right foot standing on the demon Muyalagan (symbolising Aanavam) Bestowing of Grace – the lifted leg
The left hand point to this foot to show that surrendering at Lord Nataraja’s feet will lead to Realisation. 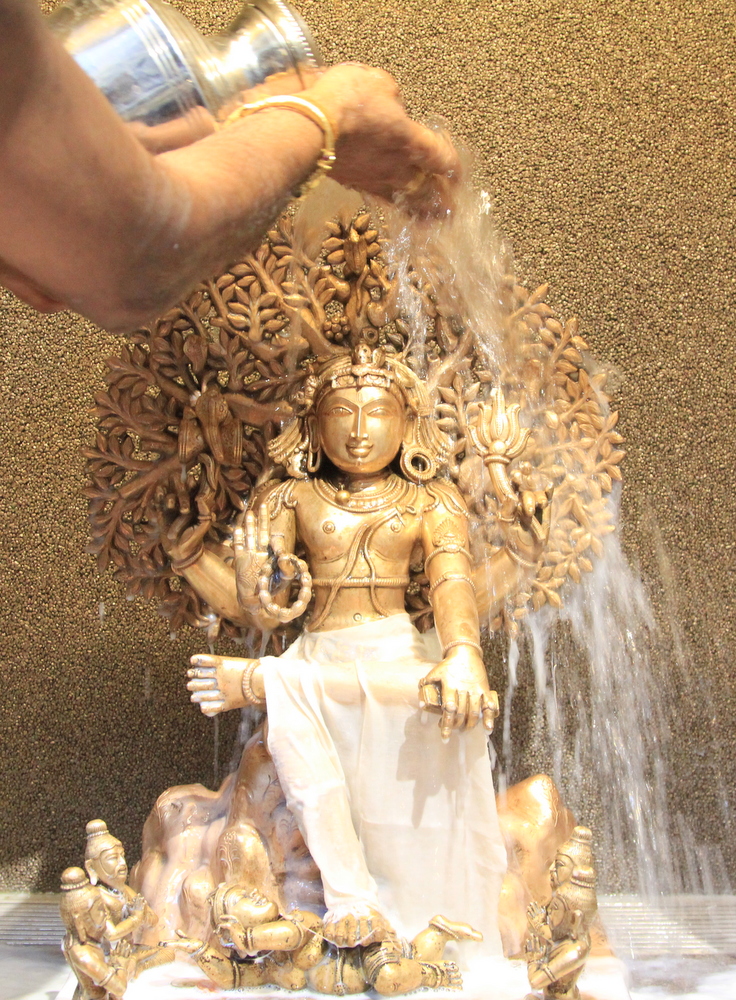 Dhakshinamoorthy
Dhakshinamoorthy is the form of Lord Siva facing the South. In this Yogic pose,seated under a Banyan tree, Lord Siva imparts the Knowledge of Divine Wisdom to the four learned Sanakaathi sages (symbolising the whole of humanity). In silence, Lord Siva shows the Chinmudra -the symbol of wisdom. This represents how the soul should seek union with God. When the Soul (index finger) reaches God (thumb), the attachment (paasam) represented by the other three fingers moves away. This is the Yogic form of Lord Siva, upon which devotees meditate. 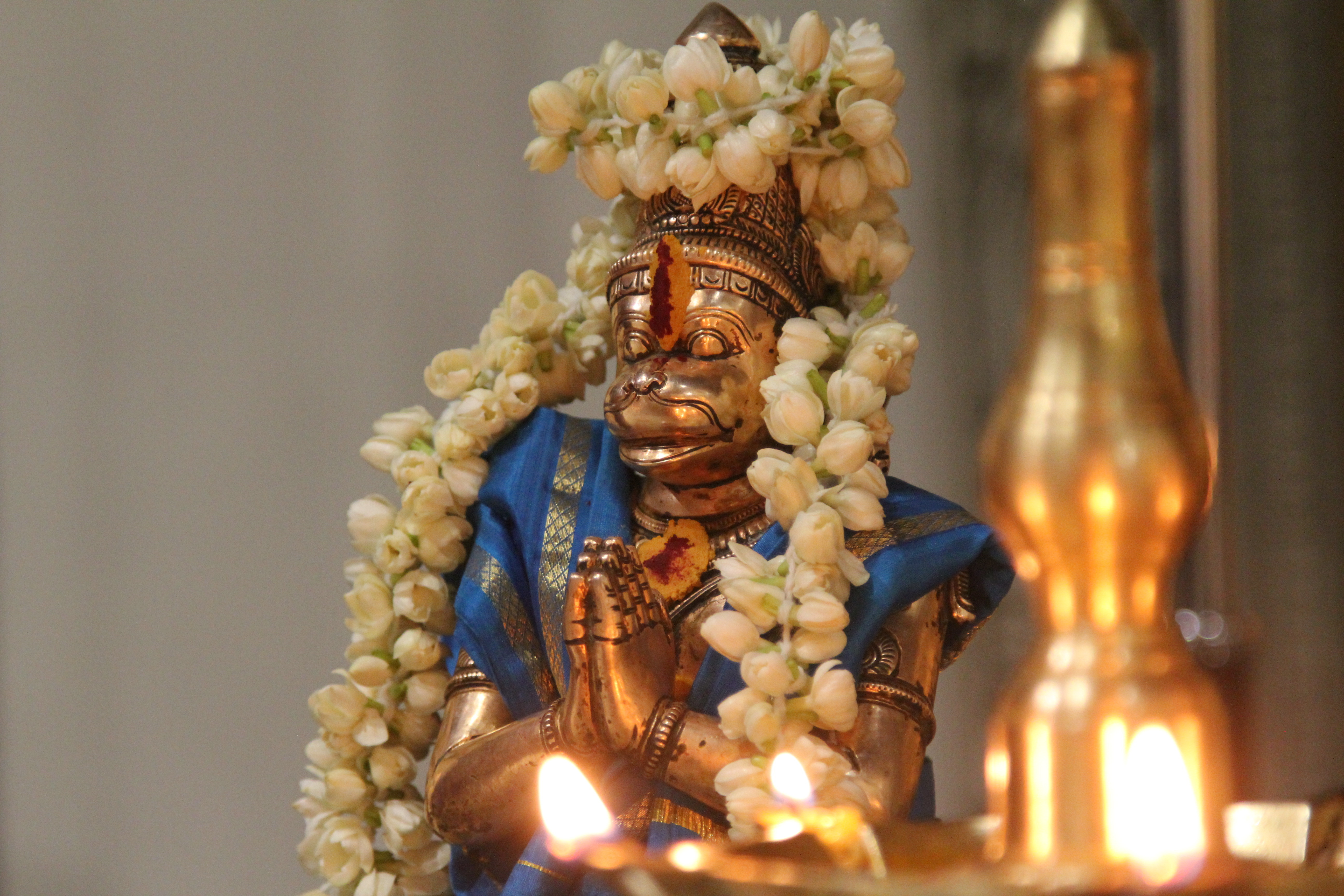 Hanuman
Lord Hanuman – The son of Lord Vayu and Anjanadevi, also known as Anjaneyar. He was the most faithful devotee of Lord Rama and played a major role in the Ramayana.
He is known for His quick intellect strength fearlessness and courageous speech. He is depicted with hands folded in prayer, to show that if you have absolute faith in the Lord, great miracles can happen. 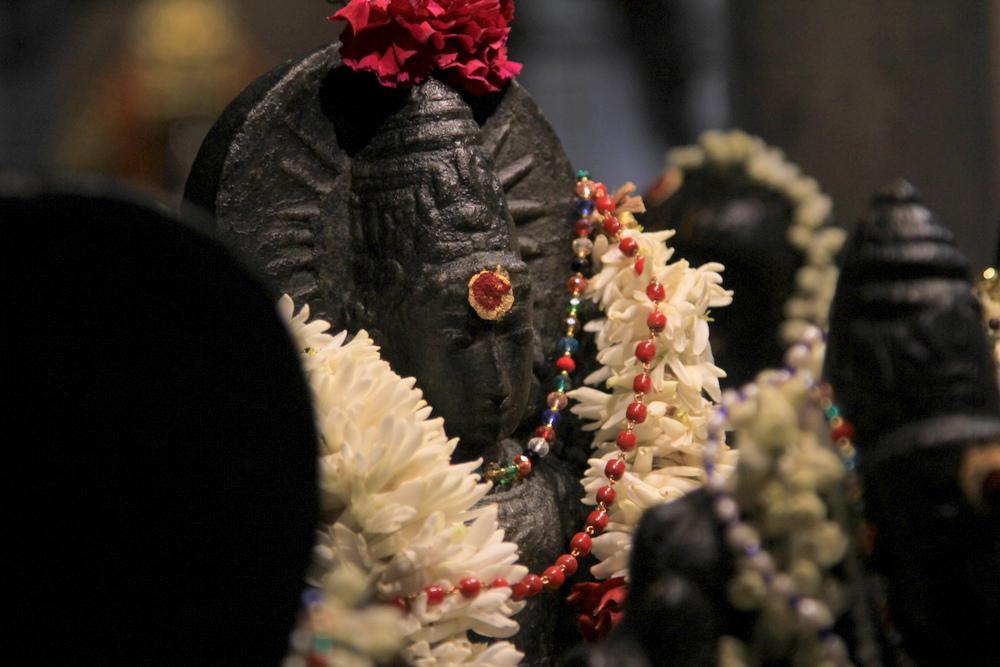 Lord Ayappan
He is the son of Lord Siva and Lord Vishnu (in the form of Goddess Mohini). Thus He is also known as Hariharasuthan. With a special bell around His neck, He is also known as Manikandan. His vehicle is a tiger. In the month of Thai (first month of the Tamil Calendar) pilgrims travel to Sabari Malai for His special blessings as Maharajyothi. He is seated in a yogic pose, with the right hand in Chinmudra and the left hand pointing downwards.
“Om Swamiye Saranam Ayyappa”

Lord Dhanvanthri
Lord Dhanvanthri is an Avatar of Lord Vishnu. He appears in the Vedas and Puranas as the physician of the gods and the god of Ayurvedic medicine. Devotees pray to Him for good health for themselves and for others. Lord Dhanvanthri is said to have emerged from the ocean, holding a pot of Amrit (giver of eternal life), a Conch (Shangu), a circular spinning saw (Chakra) and a Jalouka (medicinal leach). He protects all living beings from disease, untimely death and eliminates sorrows.
Lord Rama, Sita, Lakshmana
Lord Rama – The hero of the Hindu epic Ramayana, and the 7th avatar of Lord Vishnu in the Treta Yuga. The Prince of Ayodhya, He was the ideal man and established Dharma (righteousness) in all that He did. In our Temple He is accompanied by His wife Sita, His brother Lakshmana and His most faithful devotee Hanuman.

Venkateshwara
Venkateshwara also known as Srinivasa, Balaji, Venkata and Venkatacalapati, is a form of Lord Vishnu. Venkateshwara’s most prominent shrine is the Tirumala Venkateshwara Temple located in Tirupathi, Andhra Pradesh in Southern India. In one hand He has His Chakra, the other a conch, He holds His mace in his 3rd hand and the 4th hand points downwards to His feet, showing that He will bestow Grace on all who surrender at His feet. In the form at our Temple, He is accompanied by His two consorts Bhoodevi and Sridevi and is the ultimate protector in this Kali Yuga.

Lord Krishna & Radha
From the Dwapara Yuga, Lord Krishna is said to be the 8th avatar of Lord Vishnu. He is the central character of the Hindu epic The Mahabaratha and gave the world the Bhagavad Gita. In our temple, He is depicted with Radha, who personifies all devotees who love Him with a pure heart

Sandeshwara
He is known as the greatest devotee of the Moolasthana deity, as He is always placed directly facing the Moolasthanam and in such a way that no one can cross His path. When devotees come to pray at His shrine, they clap their hands 3 times to alert Him of their presence and humbly request that He allows the benefits of their prayers to reach them.

Bhairavar
Vairavar (Bhairavar) – is another son of Lord Siva and is regarded as the Guardian of the Temple. Situated by the main doors of our Temple, His vehicle is a dog. He is also called Kaalavairavar, as He maintains time for the worship and rituals in the Temple.
He is prayed to last in gratitude for enabling the completion of the Pooja. As He is also regarded as the manager of the temple, a set of keys are symbolically left at His feet after the temple has been locked up, so that He will keep an eye on the Temple whilst everyone else sleeps!

Kolaru Pathikham
The elderly Saint Thirunavukarasar, met the young Saint Thirugnanasampanthar, in Thiruvengadu, where they spent some time together. During that time, he tried to dissuade Sampanthar from travelling to see the Pandiyan King in Madurai, fearing for his safety.
He gave many reasons, ending by saying that astrologically, it was an inauspicious time!
Sambandar immediately responded to Thirunavukkarasar that no harm would come to an ardent Siva devotee like himself. He then composed and sang the Kolaru pathigam.
(Kol=planet. Also stands for the negative effect of the planet.
Aru = remove, pathigam=set of 10 songs)
Pann: Piyanthaik kaantharam
Raagam: Navaros
Thalam : Thisrathirupudai
Place: Thirumaraikaadu
Thirumurai 3